Recently, I was evaluating options to purchase an inbound marketing automation platform. I was talking to the 800lb Gorilla in that industry (seriously, if you google the term “Inbound Marketing Automation”, they have results 2 and 3…Wikipedia is number 1, and their partners are about half the ads). At the end, I hesitated to spend the $10,000 on the system. Its a lot of money on a system that hasn’t yet proven itself in my business. And then they had a chance to snatch victory from the jaws of defeat, they failed.

Am I implying that they could have saved the sale? They probably could have saved it. Their site prominently features a 30 day trial. If they had offered me the trial, and during the trial, we had significantly increased my leads, and site traffic and authority, I probably would have taken the plunge. Especially since the reason I gave for not signing up at all was short-term cash flow, an issue that would have been resolved at the end of the 30 day trial. 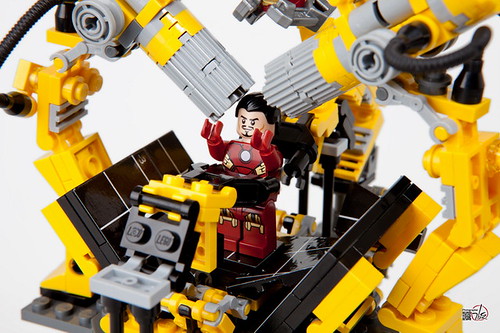 Whenever you sell a machine, you always say "let me show you how it works" especially an inbound marketing automation machine.. Photo courtesy of stick_kim(CC No Derivatives)

So why didn’t the sales rep make this offer? We’ve all heard it before…as long as the sales person is talking, he’s still closing. He had an additional tool in his arsenal to continue talking to me for 30 days (that would have also potentially helped him sell) and yet he shut up and let me walk away…why?

Because, to paraphrase the NRA: “Hammers don’t hammer nails…people do.”

I had two blog posts on my site so far. If I hadn’t blogged up to that point, why would I do it on the free trial? The system wasn’t going to change that. Some one had to write the content. An inbound marketing automation system wouldn’t be able to do do that for me any more than a hammer could hammer my nails for me. I see this a lot with WordPress developers that promise SEO and then just install the Yoast SEO plugin and do nothing with it. The hammer won’t hammer the nails for you is a metaphor I use all the time when explaining to new clients why their site doesn’t actually have any SEO done to it.

Up until that point, the inbound marketing automation system had been spoken of as if it were a magical object. As if merely possessing it would cure all of the marketing ills. Yes, the work was mentioned in phrases like “if you just increase your blogging from once a month to one a week, or ideally twice a week” Once the weakness that I needed to actually run the machine would be exposed, he was sure either I wouldn’t be sold on the system or I wouldn’t do the work and the system would look like the problem. Really, if he didn’t think I was going to do the work, he shouldn’t have tried to sell me on it, but that’s a post for another day.

The hammer isn’t going to nail the nails for you, and the best inbound marketing automation system won’t do your marketing for you!. Photo courtesy of Kyle May(CC Attribution)

Curtis McHale touches on this when writing about people who buy business marketing courses, read them, but then don’t follow through on the steps. Its titled (appropriately enough) “You Won’t Succeed If You Don’t Do the Work”.

Have you had a case where you bought the tool and didn’t do the work? Tell us about it on Twitter